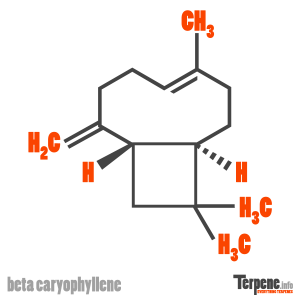 The analgesic effects of beta-caryophyllene were evaluated in the rabbit conjunctival reflex test and in a rat phrenic nerve-hemidiaphragm preparation. Beta-caryophyllene attenuated thermal hyperalgesia and mechanical allodynia, and reduced spinal neuroinflammation. Also there were no signs of tolerance to the anti-hyperalgesic effects of BCP after prolonged treatment.

Beta-caryophyllene was demonstrated to have a high inhibitory capacity on lipid peroxidation and showed high scavenging activities against hydroxyl radicals and the superoxide anion.

Beta Caryophyllene is also know by these other names

Not a hazardous substance or mixture.

Read through our forum on Beta Caryophyllene below, or start your own topic.