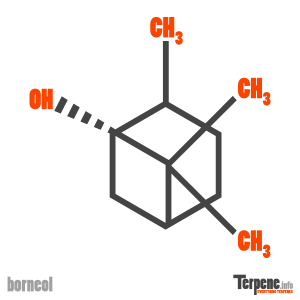 Borneol is a bicyclic monoterpene with a balsamy, camphor, herbal, woody scent. Borneol is commonly used in asian traditional medicine. Borneol has demonstrated more potent effects than the local anesthetic, lidocaine, and can also be eaten for its analgesic effects. Borneol has acted as an anticoagulant in stroke models, and alleviates the mechanisms of proinflammatory cytokines in general. The terpene has induced fungicidal activity against several species of fungi. In addition, borneol has elucidated to help drugs cross the blood brain barrier at a higher rate than without borneol.

Borneol’s effect on the nicotinic acetylcholine receptor in cow adrenal chromaffin cells was investigated. Borneol was found to inhibit a nAChR agonist, DMPP. Sodium increase and secretion of norepinephrine were inhibited by the terpenol. The results showed borneol to be more potent than a commonly used local anesthetic, lidocaine.

In another study borneol’s effects were explored with stroke induced rats.Borneol was shown to significantly ameliorated ischemic. Reduced levels of pro-inflammatory mediators was also seen.

Borneol was deduced to inhibit fibroblasts mitosis, collagen and TIMP-1 production. In addition, borneol had no cytotoxicity on mice oral fibroblasts.

Borneol was found to be non selective at inhibiting growth and development of reproductive stroma of the plant pathogens Colletotrichum acutatum, Colletotrichum fragariae, and Colletotrichum gloeosporioides. There was also significant antimycobacterial activity observed against Mycobacterium intracellulare.

Passing the blood brain barrier is important in administering many drugs. Borneol was proven to help increase concentrations of a polar natural compound kaempferol in rat brains. The total concentration of drug increased 2.09 and 3.18 and the brain-to-blood distribution ratio increased by 48.68% and 57.97% .

Borneol is also know by these other names

Read through our forum on Borneol below, or start your own topic.